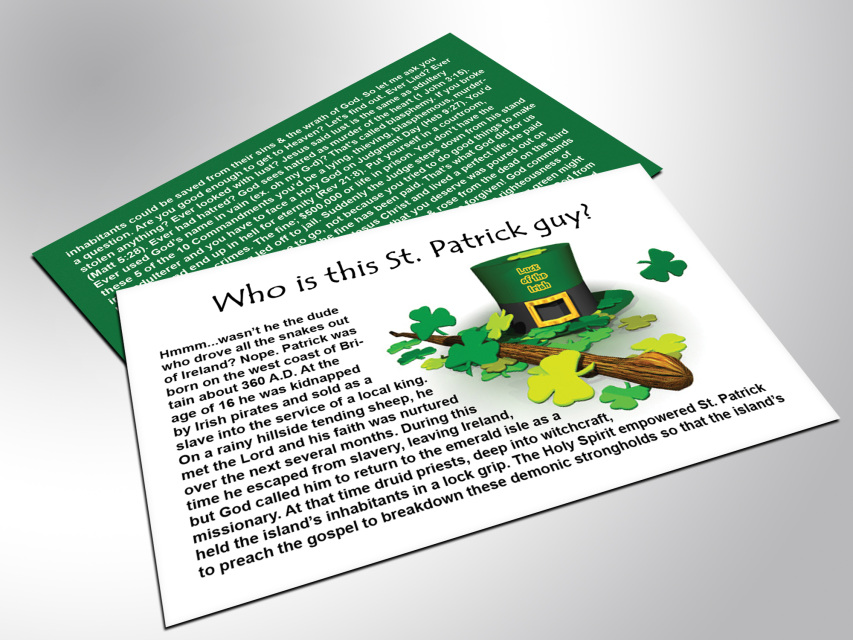 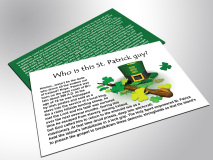 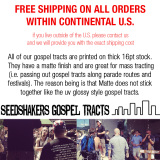 Who is St. Patrick Gospel Tracts

Back reads: Hmmm...wasn’t he the dude who drove all the snakes out of Ireland? Nope. Patrick was born on the west coast of Britain about 360 A.D. At the age of 16 he was kidnapped by Irish pirates and sold as a slave into the service of a local king. On a rainy hillside tending sheep, he met the Lord and his faith was nurtured over the next several months. During this time he escaped from slavery, leaving Ireland, but God called him to return to the emerald isle as a missionary. At that time druid priests, deep into witchcraft, held the island’s inhabitants in a lock grip. The Holy Spirit empowered St. Patrick to preach the gospel to breakdown these demonic strongholds so that the island’s inhabitants could be saved from their sins & the wrath of God. So let me ask you a question. Are you good enough to get to Heaven? Let’s find out. Ever Lied? Ever stolen anything? Ever looked with lust? Jesus said lust is the same as adultery (Matt 5:28). Ever had hatred? God sees hatred as murder of the heart (1 John 3:15). Ever used God’s name in vain (ex. oh my G-d)? That’s called blasphemy. If you broke these 5 of the 10 Commandments you’d be a lying, thieving, blasphemous, murdering, adulterer and you have to face a Holy God on Judgment Day (Heb 9:27). You’d be guilty and end up in hell for eternity (Rev 21:8). Put yourself in a courtroom, guilty of serious crimes. The fine; $500,000 or life in prison. You don’t have the money so you’re being led off to jail. Suddenly the Judge steps down from his stand and pays the fine. You’re free to go, not because you tried to do good things to make up for your crimes, but because the fine has been paid. That’s what God did for us 2,000 years ago. He became a man in Jesus Christ and lived a perfect life. He paid your fine for breaking God’s Law. The wrath that you deserve was poured out on Jesus upon the cross. He died, was put in a tomb, & rose from the dead on the third day, proving that His sacrifice was sufficient. You can be forgiven! God commands that you confess and forsake your sin (repent) and trust in the righteousness of Jesus Christ to save you. (Acts 17:30-31, Romans 3:19-26). Wearing green might keep you from getting pinched but that isn’t going to keep the wrath of God from crushing you. You need Jesus to save you! Read the Bible; obey what you read.  Start in the New Testament.    www.seedshakers.com
Terms of Service: Due to the custom nature of our products, we do not accept returns or issue refunds. All items are printed on demand once they are ordered. If there is an error with your order (being that it is different than the proofs provided on the website or via email) we will issue a complimentary reprint. If you are planning for a specific event, please allow 2 weeks for optimal turn-around time. We do offer expedited production and shipping upon request.
SeedShakers - All Rights Reserved